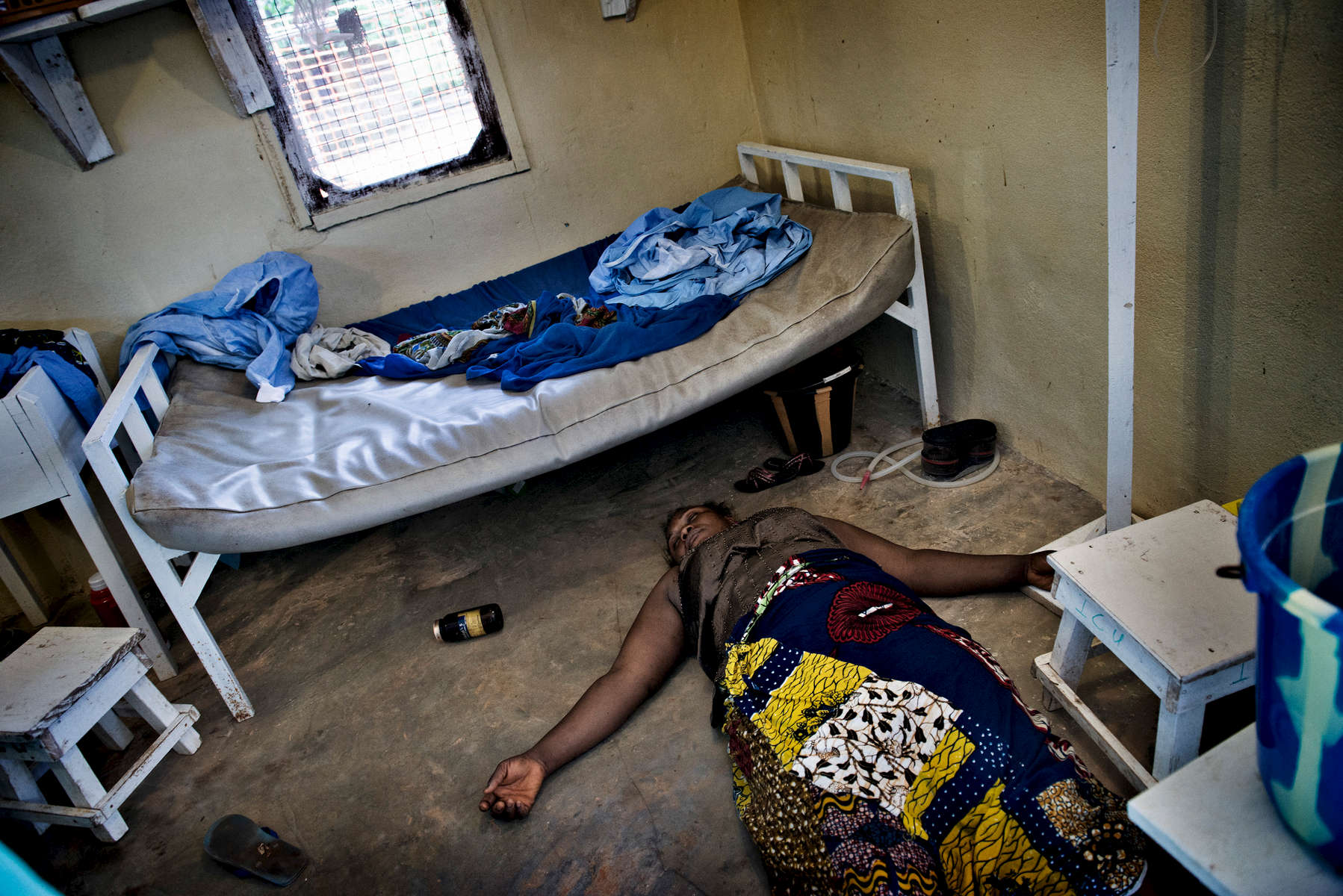 Kadiatu, sister of Zaniab Conte fainted on the floor next to her body, upon realizing Zainab might not survive. Zainab Conte, 20, a third year medical student, lies in a coma after suffering from post-partum hemorrhaging while delivering her baby at a government clinic at Mile 91 outside of Freetown, Sierra Leone, October 27, 2012. Conte's in-laws brought her in a vehicle for a two hour drive to the Gondama Referral Center, where they were told she would receive proper emergency care for the massive blood loss. Zainab's mother-in-law, Rosalina Hawa Conte, and Zainab's sister, Kadiatu Bangura, 27, watched over her for five days before she passed away from the trauma her body suffered. Dr. Betty Raney, 57, from Indianapolis, US, and Dr. Etienne Penlap Temdie, 41, from Camaroon, and Dr. Bah Oumar Pathe, treated Zainab from her arrival at the GRC until her death. Dr. Betty reports on the situation, "Zainab's problem was hemorrhagic shock.  She bled so much that there just weren't enough red blood cells in her blood vessels to transport oxygen to the brain.  It's like putting a rubber band tightly around your finger.  The blood supply gets cut off and the finger eventually quits working and just dies off.  She had a global ischemic event to her brain due to the hemorrhage after delivery." Sierra Leone has one of the highest rates of maternal mortality in the world, with only three OB/GYNs working in government hospitals around the country--the same amount as currently working in the privately-run MSF Gondama Referral Center, alone. Though the government of Sierra Leone introduced free health care to pregnant and lactating women, and children under 5, across the country in 2010, the services and trained medical staff are inaccessible to much of the population. MSF has been able to reduce the rate of maternal deaths in the country by providing 24-hour emergency obstetric care, along with an ambulance system, in which ambulances are made available to villages across the district in Bo to pick up women who have complications with their pregnancies. Since 2010, the rate of maternal deaths have decreased by roughly 60% in Bo District because of these services, though women are still facing a high risk of death during childbirth across the country. (Credit: Lynsey Addario/ VII)