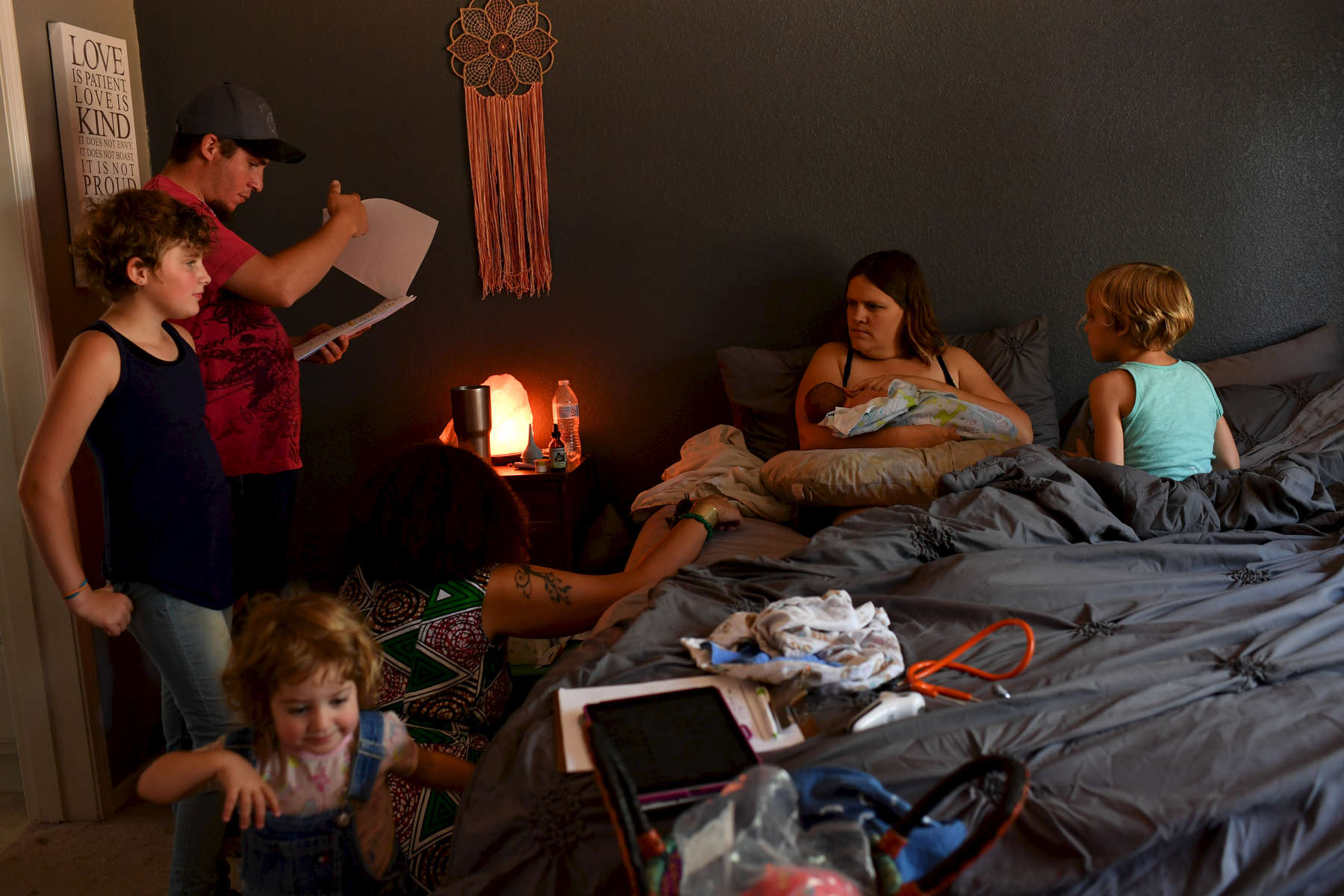 I was raised in a. Family that was very supportive of home birth. My mother was assistant an underground midwife in Illinois in the 70s and 80s. Illinois doesn’t recognise certified professional midwives/ direct entry,

LM and CMs. Practicing medicine without license, it’s a felony to deliver babies

My first birth experience -i was 21 and pregnant and living a very natural lifestyle. Couldn’t find a midwife. I am going to labor at my mothers house and go to the hospital when

I didn’t make it to the hospital, the paramedics were called and i pushed her out and had my first home birth. I was studying culinary, and decided to be a midwife, it became my purpose and calling, taught Lamaze in the basement, did breastfeeding consulting.

My older sister wanted a doula to support her in labor, and that was twenty years in September. I had to do it. I assisted her and started taking classes and his is when CPM became a credential, taking classes from an underground midwife

Best friend married a Jamaican in april 2000 and caught her baby. Spent a month in a birth center there, i started-that was the first intro/ hands on. Battle between moving to Jamaica or here. Moved to Albuquerque. Here 18 years

New Mexico-get reimbursed for Medicaid at a higher rate, always been legal here.

Some aren’t getting paid the way we should

From Taos first baby was in a hospital in pueblo, Colorado in Park view and second was home birth

My aunt was Nando’s first client and she was talking about it and my husband was looking around. We thought the hospital did a pool birth and the hospital wouldn’t do it

Second child 20 months. It wa S completely different experience, in our living room, incense, lighting was dim, music in the background, didn’t always have doctors coming in and getting poked, lay in your own bed and shower in your own shower. My husband too-my husband would talk me out of a hospital

Daughter was two weeks early and son was

Can’t do births before 27 weeks

I was only 27 when i had broooklyn, and i didn’t know anything about home births

My doctor was in the military and she was tough.

I felt fine, it wasn’t over the top painful. It was awesome. I am so excited to do it again. At first i went to the OB that my mom had with me, and the vibes he wa shoving off, sending weird vibes to my boyfriend. My parents had a friend who gave birth to her kids at home, and then looked around to people who would take my insurance. I have Medicaid-

77% of midwife clientele is Medicaid

My parents were a little unsure about it. My mom had never even thought it was a real possibility

It was a house full of people, and it will be again. Ten people were there- there was music and affirmations on the walls, candles, salt lamp, foam, had a pool

Having a boy, a very special baby. He is the only boy! Wow, only king

Nandi: she found me and did his as a teen. When i got pregnant and did this she was 17. My dad always raised me-there is always multimple ways to do everything, so do your research And do what it’s

Five other children first one hospital,

It was our first baby and that’s what you did

Though his sister who recently passed/ she shared he home birth. Orion and rosy at home/ Tabatha we didn’t have the finances for home birth

We started care at UNM AND something didn’t feel right. I googled her and started calling and we met and o was like yep, Nandi is what i want.

I hadn’t really felt right for a week or two. I am so grateful for your care, and that you identified these things

19.5 UNMH hospital, had been planning home birth and had pre-eclampsia

I didn’t realise i had severe pre-eclampsia.

They kept telling me my blood pressure was good

I don’t remember hearing you have severe pre-eclampsia.

Delivered at home in bedroom, it was amazing

Shoulder got stuck, four pushes he was here!

Hospital in Lovelace hospital: she was face up, had epidural she had jaundice pretty badly and we were in hospital 6 days

I have been thinking about that a lot bc everyone has been asking me, i had some injuries form having my daughter and i thought i don’t want to

We were Lovelace doing prenatal care,

My midwife at hospital wasn’t interested in my husband’s opinions and my mom is a doula and she talked it up.’i decided one day i am going to do this, and my husband and let him know and he was worried.

I called Jennie west and they recommended Tiffany and Nandi